The recent release of Damien Echols, Jessie Misskelley, and Jason Baldwin (also known as the West Memphis Three) may remind the residents of San Antonio and Bexar County of another young man – Ruben Cantu. Ruben Cantu was a Texan who was tried in San Antonio, Texas for the murder and attempted murder of two males at a construction site. While the two cases vary in both the scope of the crimes and the outcomes of those convicted, they can teach us an indispensable lesson in the fallible nature of our criminal justice system.

In both cases, all four young men were all tried as adults (despite the fact that Damien Echols was the only one who was over the age of 18 years old at the time of his alleged crime) and there was no physical evidence linking them to the crimes. In addition, the prosecution’s entire cases hinged on the shaky testimonies of sole eye witnesses. Testimonies that were later recanted.

In San Antonio, Ruben Cantu was convicted and later executed for armed robbery and murder that occurred in 1984. Many believed, and still believe, that Ruben Cantu became the prime suspect months later when he shot an off-duty police officer in a barroom altercation. Was Ruben Cantu framed for a crime he did not commit because of an unrelated incident? In the years following his conviction, the surviving victim Juan Moreno, the co-defendant David Garza, the then Bexar County District Attorney Sam Millsap, and the head juror have all publicly declared that Ruben Cantu’s guilty verdict and death sentence were a mistake. The state of Texas administered a lethal injection to an innocent man.
END_OF_DOCUMENT_TOKEN_TO_BE_REPLACED 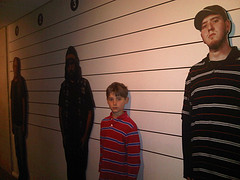 HB 215, codified as article 38.20 in the Texas Code of Criminal Procedure, requires all law enforcement agencies in TExas who regularly conduct photograph or live lineup procedures when performing the officer’s official duties. According to the bill, law enforcement agencies can either adopt the model policy created by the Bill Blackwood Law Enforcement Management Institute of Texas at Sam Houston State University or the law enforcement agency may adopts it’s own written policy that conforms to subsection (c) of Article 38.20.
END_OF_DOCUMENT_TOKEN_TO_BE_REPLACED