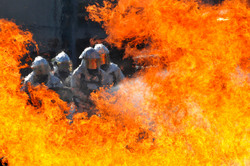 In the early morning hours of December 23, 1991, a fire quickly spread through the Texas home of Cameron Todd Willingham and Stacy Kuykendall. Kuykendall had already left the house to run errands. Willingham was able to escape moments before flames completely engulfed the house. Their three daughters did not survive. The fire was ruled an arson and Willingham was tried for murder and sentenced to the death penalty in August 1992. He was executed February 17, 2004. Willingham maintained he was innocent and now his family is seeking a posthumous pardon.Surviving relatives Eugenia Willingham and Patricia Willingham Cox are petitioning Texas to exonerate Willingham based on new evidence and new scientific procedures that have developed since 2004. At the trial, the Willingham’s conviction was based largely on the testimonies of the fire investigators and Willingham’s cellmate. Jailhouse informant Johnny Webb stated that Willingham admitted that he had set the fire on purpose. Webb was subsequently released from prison early. Years later, Webb recanted his testimony and declared that Willingham was innocent. Assistant Fire Chief Fogg and Fire Marshall Vasquez testified that the fire was started by an accelerant. But, in the trial, both men acknowledged that the fire could have been caused by other means than accelerants.

Since the time of the trial, new science has emerged that refutes the testimonies of the police investigators. Studies and reports by leading arson experts have cast serious doubts on the validity of the evidence used to convict Willingham. In 2004, independent expert Gerald Hurst reviewed the evidence and determined that faulty forensic evidence was used. An expert panel of five arson scientists stated that the indicators used by the State’s experts have been proven to be scientifically invalid. In 2009 the State of Texas ordered that Willingham’s case be re-examined. In that same year, a report issued by Dr. Craig Beyler, stated that “a finding of arson could not be sustained”. Dr. Beyler discredited the testimony from a fire marshal at Willingham’s trial stating that the testimony was “hardly consistent with a scientific mind-set and is more characteristic of mystics or psychics”. In addition, the Texas Forensic Science Commission stated in 2011 that there is a lack of science education amongst fire investigators.

In Texas there have been a total of 489 executions since 1976. There were 17 in 2010 and 13 in 2011. There have been 12 so far in 2012. The current death row population is 308. Ten of those are women. The death penalty was reinstated on January 1, 1974. The possibility of life imprisonment without the possibility of parole was not available until September 2005. Majority of criminal analysts reject the favored argument that executions lower homicide rates and deter would-be criminals. A 2010 report from the FBI Uniform Crime Unit shows that the South has the highest murder rates despite having the highest execution rates. A study in 1992 found that the death penalty costs Texas about $2.3 million per case, which is three times the cost of imprisoning a person for 40 years.

Before his trial, Willingham had the chance to plead guilty to avoid the death penalty. He refused to accept a plea deal because he maintained that he was innocent. The State of Texas has erred by putting an innocent man to death. It is too late to save Willingham’s life, but it not too late for Texas to do the right thing and exonerate him.

Even if you or a loved one has been convicted, you can still fight your case. Contact the Law Office of Dayna L. Jones at (210) 255-8525 to schedule an appointment with the attorney. Calls are answered 24 hours a day, 7 days per week.